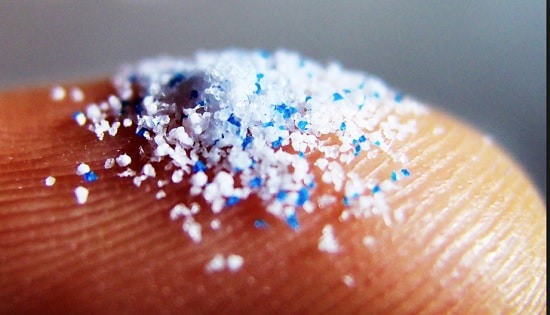 In this survey, its find out that human ingest up to 52,000 microplastic particles each year.

Microplastic is very small pieces of plastic that spread into the environment and pollute it. Man made products such a polythene, bags, tyers and many other. They found in the deep ocean and well as highest mountains as well.

Many researches show that how Microplastic entered in human food. More than 1.5 million pounds of plastic is dumped into the ocean every year. The fish we eat in our plate may eat Microplastic in the ocean. And many times it is prove by many videos as well.

Microplastics – tiny pieces, many times invisible pieces of plastic are present in our diet, water, air, and even in stomachs as well.

A new research published on business insider website state that Americans eat about 200 Microplastic pieces every day. Which is roughly 6000 tiny plastic pieces in the month and around 72,000 pieces in a year. Consuming too much plastic in our diet could mess with our health and create many health issues.

We eat Microplastic, No worries.

This research data is based on 25+ studies, 3,000-3,500 food and drink samples. Though, various food samples include salt, sugar, beer, seafood, honey and water from various taps and bottles. After that it’s calculated that how much of these items consumed by human per day on an average basis. Their figures suggest that Americans eat 200 to 310 pieces plastics every day depends upon their age, sex.

Read: Angler catches Deformed fish, plastic around of it

As per the study, microplastic consumption in human body ranges from 39,000 to 52,000 particles. Americans inhale, approximately 74,000 and 121,000 tiny plastic pieces every day. People who drink from plastic bottles may ingest 90,000 microplastics annually.

Alastair Grant, Professor of Ecology at the University of East Anglia inform that these figures are rough estimates only. But if this is the reality then results may be drastic. The World Health Organization also informed that there is less data available to conclude that tiny plastic pieces are hurting humans. But research done on other animals is not good and a matter of worry for us.

According to the U.S. National Oceanic and Atmospheric Administration type of plastic fragment is less than 5 mm in length. This is very small that human can not even feel it, while eating or drinking.

Microplastics contain a phthalates chemical, which is use in plastic packaging. According to the US National Institutes of Health, one phthalate can cause cancer.
Another chemical is BPA(bisphenol A),used in the lining of canned foods and drinks. As per the survey of Centers for Disease Control, 95% of US adults have detectable levels of BPA in their bodies.

Mount Everest is full with Microplastic?

Yes, Mount Everest, the highest mountain in the world is full with plastic. As per recent news, 11,000 kg of waste have been removed from there. This waste includes empty water bottles. Ropes, carry bags, platic tent, shoes and many more.

MONTEREY BAY is Poisoned with Microplastic.

California’s MONTEREY BAY is worlds famous coastal ecosystems on Earth. Which is more pure, more dynamic. Also, researchers found that many bay animals were loaded with microplastic. Many of them are old plastic, which is floating around for years. They are making their way into animals.
Oceanographer Kim Martini informed that,”cleaning up is not the first step we should take.” But we should treat plastic like another pollutant. Due to so much plastic around, Monterey Bay will never be the same again.

Experts inform that more search is require to understand better, how many microparticles reach the lungs, stomach and their impact on our health.

There are several ways to reduce plastic consumption. The best way is to use Make Roads from Plastic, they are more durable and long lasting as compared to concrete roads. India has already start preparing Plastic roads in many places.

Detox Tea Does it help in weight loss?

Ways to Help Families to Get Good Health