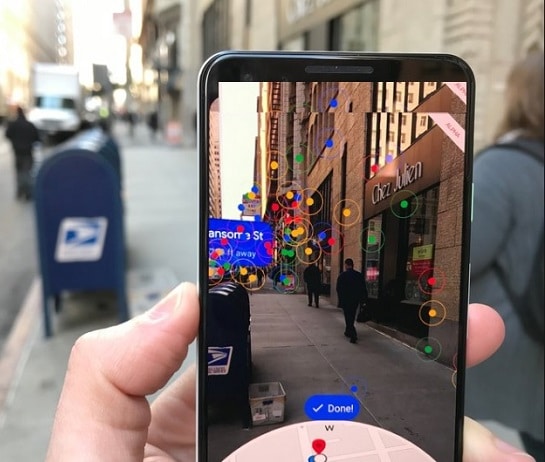 Visual Positioning System (VPS) is a new feature of Google Maps can also be used, when your GPS(global Positioning System) is not enough. Your mobile phone’s camera and Google’s extensive back-end data is used by VPS to analyze your surroundings to identify to give you more accurate location.

Google has already announced release of many software’s and release new features. Visual guidance and Visual Positioning System in Google Maps Navigation are few of them.

Read: This network technology is 100 times faster than 4G

Before it was very difficult to predict that “if I am going to right direction or not”? Now, Google Maps can use your camera to detect your surroundings and visually communicate your route right in front of your eyes that will make your life easier. This new feature is a powerful addition to Google Maps and Street View.

If you would like to enjoy this new feature, then to activate visual view, just tap a button.

After that point your camera wherever you would like to go to see the relevant info. You will see your surroundings with related information with Maps.

Big arrows will point you in the direction where you need to go. However, the small map will appear at the bottom to remind you that where you are heading to? To enhance this feature, Google planning to putting a character on the screen as an augmented reality tour guide.

Weak network signal often causes Location issues. If you can not see the sky, it means that you may be going in wrong direction and may be lost. The Fraction of a second delay in the signal can the deadliest problem for pilots. GPS is unable to locate terrain, man made buildings like skyscrapers.

The company’s Aparna Chennapragada already showing off updated version of GPS. if a person mistakenly walked away’s from the subway and doesn’t know if he is going to right direction or not? Then hold the phone and open the camera.

Your camera lens will identify your surrounding view and compare it with the Google’s database of Street View images in the region. Once system has your position, arrows will appear on the screen, will show your direction along with the map on down side of screen.

Read: Germany is offering scholarships to students around the world

Google company have not revealed that when this is coming to phones and other gadgets. Although it may be a built-in feature for upcoming Google Lens.

How will 5G network will change our life
Agent Smith Malware can sneak in your phone, 25 Million Phones affected