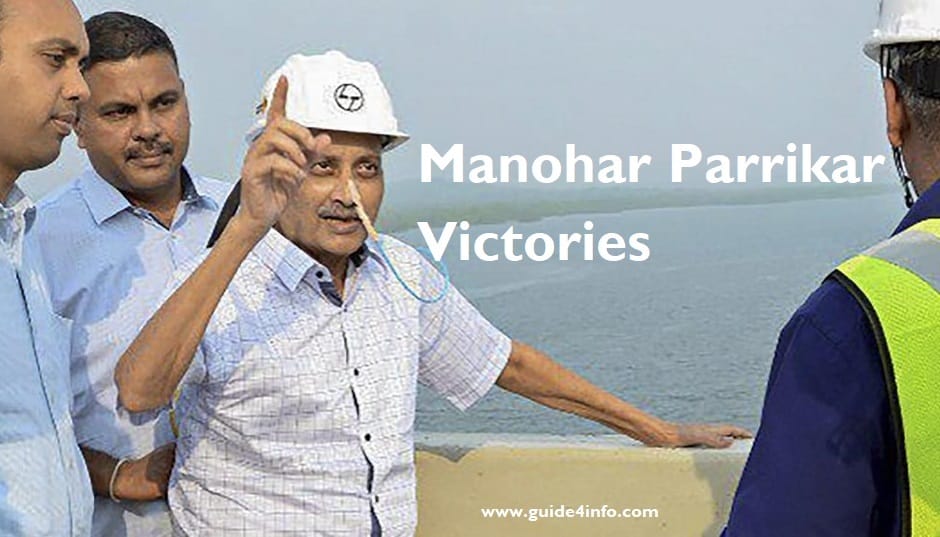 Goa Chief Minister Manohar Parrikar was battling with pancreatic cancer. This is the deadliest form of cancer as its symptoms are not visible at early stages of life. The expert says, about 95 percent of pancreatic cancer patients die from it. He was born in 13-Dec-1955 in Mapusa, Goa, India. Do you know that full name of Manohar Parrikar, its Manohar Gopalkrishna Prabhu Parrikar. He belonged to a village of Parra in Goa, hence he called Parrikar.
There are several victories of Mr. Manohar Parrikar, though I have tried to represent few in front of you.

1) Smiling Face in all situations:

The doctor informed that; Mr. Manohar Parrikar visited the Mumbai’s Lilavati Hospital on 15-02-2018. He added, a person visited our hospital with a smiling face. manohar parrikar health was stable that time. He was the man who wore half sleeved shirts for any occasion, always prefer simple life style. A person who never hesitates to wear sandals at everywhere, even in Parliament also. Parrikar prefer riding a scooter or walk rather than traveling in expensive cars.

2) A Leader, Who can manage Team better than others

Mr. Manohar Parrikar had the ability to manage states to coordinate for military or other purpose. He was the strong pillar of bharatiya janata party.
Parrikar joined the party in 1989, that time approximate 4,000 members. In his leadership 4.2 lakh members added to the party.
His void is impossible to fill at any cost in India. When PM Narendra Modi was searching a leader for defence ministry, only name came to his mind was Mr. Manohar Parrikar. He was also known as pracharak in Rashtriya Swayamsevak Sangh. Indian Army conducted surgical strikes under his leadership as Defence Minister.

3) Continue working till his last breath:

He announced in January 2018 that he will keep working for the residents of Goa till his last breath. And he had proved that. Though he was not well, still attending meeting, regular meeting with party people and discussing party plans. People informed that he worked for almost 16 to 18 hours a day. He was fighting a battle with pancreatic cancer, So he needs rest instead of non-stop work. Parrikar was a workaholic and took his own decisions. Despite Manohar Parrikar illness, he attended the budget session on 29th January 2019. On 31-01-2019, he was admitted to AIIMS, New Delhi and returned to Goa on 05-02-2019.

Serving Indian Army as Defense Minister for years, He was time punctual, always arriving in meetings and rally on time. In one rally in Panaji, he arrived on a bike. There was no loudspeaker, no garlands.

He maintains a private business. Very few people know that he owned two nondescript hydraulic engineering units, where 20 people were working. He was very intelligent, done his bachelors of Technology in metallurgical engineering from IIT Bombay in 1978. Parrikar love football game. There are many pictures posted on twitter, where is kicking a football in the sand.

Small story showing manohar parrikar simple lifestyle:
Once upon a time, a person in Goa driving scooty was hit by big car. A young boy came out of the car and started shouting at person driving scooty. The scooty man was smiling, without any sign of tension on this face. The young boy told him that he is the son of the commissioner of Goa. The scooty person told the young boy that he is the chief minister of goa. And yes, He was no other than Mr. Manohar Parrikar.(This story was published on LinkedIn by his fans.).

My Village, Parra is famous for watermelons and farmer organize watermelons eating contests in May. Kids also invited in that contest to eat as much as watermelon they can. After some years, I went to IIT Mumbai for engineering. I returned to my village after 6.5 years. I saw very small watermelon in the market. That time, old farmers organize the contests, they give us big watermelons to eat and spit the seeds in bowl.

Read: This cancer in Women can Return after 15 years also

He was collecting the best seeds for his season, which give them bigger watermelons next year. Now farmer’s son organizes the contest. He sold the best and big size watermelons to other city and give small one to eat and collect seeds. Hence small watermelon grown in the farms. In 7 years, Parra’s best watermelons were finished and small left behind. Until we deploy the best brain to train the next generations, this is what happen with us.