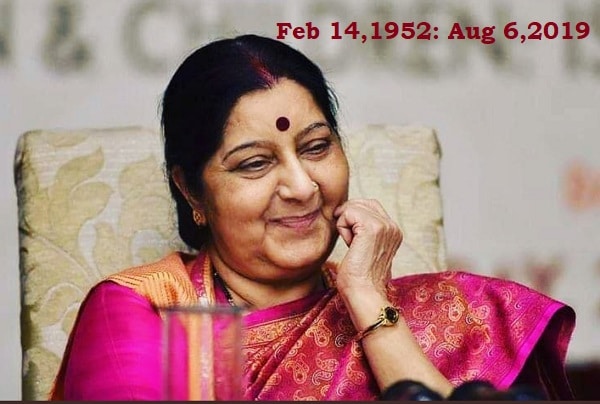 Sources said Sushma Swaraj was doing nice until afternoon but around 9.30 pm, she suffered a sudden cardiac arrest. She was rushed to AIIMS at 9.45pm. However, Swaraj couldn’t be revived. AIIMS director Dr Randeep Guleria confirmed to reports at 11pm. Her death on Tuesday left the nation in grief. She was 67.

On 6th August 2019, 7:23 PM, she tweets in her Tweeter account @narendramodi ji – Thank you Prime Minister. Thank you very much. She added, I was waiting to see this day in my lifetime. People reactions on Tweet that May be her destiny was waiting for this day only. Hindustan times also prayed, I hope she was happy in her last moments.

Where all world is sad by her demise. Seems, Some Pakistani people are very happy on Indian external affairs minister Sushma Swaraj death. When Indian Prime Minister Narendra Modi ji tweet for her sudden dismiss. Below are the Pakistani People reactions.

Indian external affairs minister Sushma Swaraj played an important role in this rescue operation. She requested Prime Minister Narendra Modi to intervene in evacuating Indians from Yemen. Operation Raahat was operated in March-April of 2015. Swaraj, also spoke that PM Modi’s foreign policy has ensured that India has friends on every side of geopolitics.

46 Indian nurses were held in captivity of Islamic State of Iraq and Syria (ISIS) militants In June 2014. This was done in a war-ravaged Iraq for 23 days. They were kept in their hospital in Tikrit when the Civil War between the ISIS forces and the Iraqi army become more intense.

Indian External affairs minister Sushma Swaraj was personally in touch with all the major Gulf countries to evacuate all nurses. She played an important role throughout the rescue operation. After nurses free and reach home, one of the nurses inform that, “ISIS militants were saying you are Indian nurses and we are not targeting you people.”Hollywood movie Tiger Zinda Hai is based on this incident only.

Many other occasions when Sushma Swaraj won the internet with her Twitter outreach as Foreign Minister: