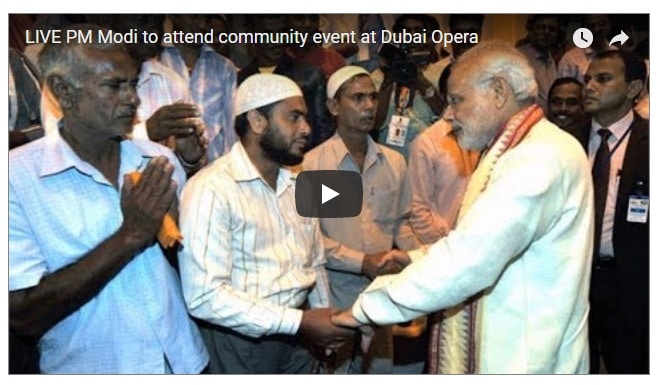 A major parts of the video include the establishment of the International Day of Yoga and the impact of Indian cinema on the world.

He mention that both the Nations are working together to build strong relationship. Best example of this is Tallest Building of the World “Burj Khalifa” is color with Indian Flag “Tri-Color“.

After that Video for the Indian Temple Inauguration play.Indians seems so much delight and full of cheers to see the Temple inauguration in Abu Dhabi.

There was no Hindu Temple in Abu Dhabi so far. And Mr. Modi promiss to Indian community in 2016 that they will have a Hindu Temple here. Now that dream come True.

Mr. Modi told that India and United Arab Emirates are not only buyer and seller. But there is a strong partnership. He say thanks to HH Crown Prince on behalf of 130 Crore Indian’s as HE allow to make Hindu temple in Abu Dhabi.

Modi ji also talk that gone were the days when Some one keep searching that where we are heading to?. And saying to each other that,”Leave it, and it can not be done”. But Now people are asking”Modi ji, when this will be done”.

21st Century is the Century of Aisa, But this will not be possible with out continues joint efforts.

Indian PM Narendra Modi told that UAE rulers respect India. This is our responsibility to take care of the ideals here. Mr. Modi addressing community of 1800 people at the Dubai Opera.