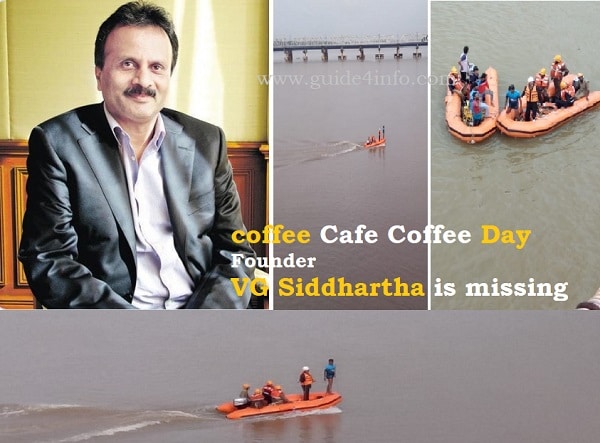 VG Siddhartha, the founder of country’s largest coffee Cafe Coffee Day goes missing since Monday night. Also, he wrote a letter to his employees that his struggles and failed business model, he is failed as an entrepreneur. Currently, there are 20,000 staff working at 1,772 different locations in CCD(cafe coffee day) chain in India.

There are reports mentioning that he jumped off a bridge in Ullal, Mangalore, Karnataka, India, this bridge is 33.25 feet high. Siddhartha came in his car with his driver and walked till the end of the Ullal Bridge before he disappeared.

Mangaluru city police started search distraught with fear for Siddhartha who reportedly jumped off the bridge over the Netravati river at around 9 pm, about 6km from Mangaluru.

Mangaluru city police commissioner Sandeep Patil inform that Yesterday, he left Bengaluru saying that he is going to Sakleshpur. But he told his driver to go to Mangaluru.

Read: These unknown facts about CM Manohar Parrikar will shock you

After reaching the Ullal bridge he asked his driver to drive a little further and park. He will walk and come, but he did not return even after an hour. The dog squad also found him to stopped at the middle bridge.

VG Siddhartha letter to his employees:

In the VG siddhartha letter, which read like a farewell statement. Siddhartha clearly mentions about his financial issues and writes, “I am very very sorry to let down all the people who had put trust in me. I had a failed business model, I face harassment former I-T official also. I fought for a long time, but today I gave and can not take anymore pressure, facing lot of pressure from lenders.”

Siddhartha also mentioned that despite his best efforts, he failed to create a profitable business model.

More than 200 personnel, including 25 swimmers have been deployed to locate him, one officer informed. Search operations are going on in Netravati river in Mangaluru to find any clue related to VG Siddhartha.

The founder-owner of the chain of Cafe Coffee Day outlets was born in Chikkamagaluru district in Karnataka. He married to the daughter of Chief Minister of Karnataka, Indian Minister for External Affairs and Governor of Maharashtra, S. M. Krishna. He joined J M Financial Limited in 1983-1984 in Mumbai as a management trainee. Later, he established a successful coffee business in Karnataka.

He had tremendous business plans. Siddhartha usually grows coffee in Chikmagalur and exports around 28,000 tonnes of coffee annually and sells another 2,000 tonnes locally for about Rs 350 million each year.