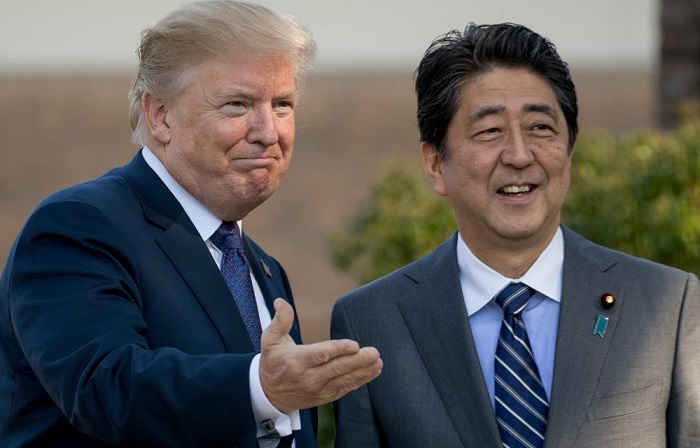 Ahead of his own lunch with Prime Minister Abe and U.S. and Japanese delegation at Akasaka Palace Monday. President Trump treate the palace Koi to a hearty lunch of their own.

Standing on a balcony above a pond, Trump and Abe were presented with wooden boxes of fish food. And proceed to sprinkle the food into the pond below with spoons. After throwing several spoonfuls of food. Trump and Abe turned over the box, dumping all of the remaining food to the fish below.

President Trump and the first lady visit the Imperial Palace. They collect for a traditional “state call” meeting with the Emperor Akihito and Empress Michiko of Japan.

In greeting the emperor, the president bow his head and shook hands with the emperor but notably did not bow.

The issue of whether and how to bow to the Japanese emperor has been a matter of contested protocol. With more than one past president receiving criticism for how they bowed. Most recently, former President Obama was critiqued for how he bowed before the emperor. which some cultural watchers said was too deep of a bow for the rank of a U.S. president.

The first lady gets a calligraphy lesson

Prime Minister Abe’s wife name is Akie Abe, brought the first lady on a visit to a Japanese elementary school Monday. Where the first lady learned the art of Japanese calligraphy.

After being welcomed to the school by a gymnasium full of singing children. A student in a fourth grade classroom gave the first lady a short tutorial in how to use a calligraphy paint brush. She carefully dipped her paint brush in ink and swiped it over a piece of paper. Copying one character that when combined with another painted by Mrs. Abe spelled out the Japanese word for “Peace.”

The two women then held up their characters together. And posed for a photo with the children in the classroom.

While visiting Akasaka Palace, Prime Minister Abe gave President Trump a tour of the grounds. And a collection of bonsai trees. The well-manicured dwarf trees are a quintessential symbol of Japanese culture.

Melania Trump learns about history of pearl harvesting in Japan

In what was her first event of the trip without the president. The first lady met up with Mrs. Abe at Mikimoto Pearl’s flagship store in Tokyo’s high-end Ginza shopping district Sunday. Where the first lady learned about Japan’s long history of harvesting pearls.

Also ms. Trump learn about how Kokichi Mikimoto, the founder of the Mikimoto brand, successfully harvested the world’s first semi-spherical pearl from an oyster through human intervention in 1893. And about the ancient Japanese practice of harvesting pearls.

Though the first lady and Mrs. Abe pose for a photo with two traditionally-dressed ama pearl divers. Who wore goggles on their heads and held barrels for oyster collection. Ama divers, which translates to mean “ocean ladies,” are women who dive for pearls, oysters and shellfish without scuba equipment in a tradition that’s more than a thousand years old in Japan.